Catalyst has visited the Colchester Prosthetic User Group’s Walking Gardens at Colchester General Hospital’s Gainsborough Wing to witness the final results of a £10,000 grant awarded for this project.

Christine Hayward, the Chair of Catalyst, Stephanie Grant, the charity’s Administrator and Rodney Appleyard, the Development Officer for the organisation, were shown how the facilities will help people with prosthetic limbs and stroke survivors to walk with confidence again after receiving hospital treatment. 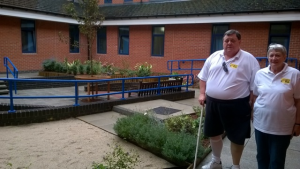 (Above: Graham Facey and June Facey)

Graham Facey, the Chair of the Colchester Prosthetic User Group, and June Facey,  the charity’s Secretary and Care Representative, led the fundraising efforts for this project, which was also awarded £59,162 from a Government fund and £10,700 from the Colchester Hospitals Charity. All of this extra funding was unlocked through Catalyst’s initial pledge.

Facey said that the project would not have got off the ground without Catalyst’s support. “Catalyst believed in us right from the start and stuck with us through a number of challenges we faced during the process of bringing it to life. The users of these walking gardens will benefit enormously from these facilities. But it never would have happened without Catalyst giving us the confidence to keep going to make this dream come true.” 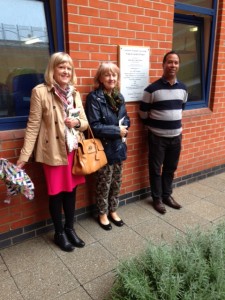 (Above: Stephanie Grant, Christine Hayward and Rodney Appleyard standing next to a plaque dedicated to Catalyst and other funders)

Want to join the discussion?
Feel free to contribute!